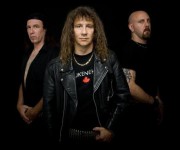 Toronto Heavy Metallers, Anvil, are streaming the title track,”Juggernaut of Justice”, off their upcoming album. To listen to the track, head over to the bands MySpace page.

A notable fact about the band, it has been cited that Anvil influenced many notable heavy metal groups, including Megadeth, Slayer, Anthrax, and Metallica.