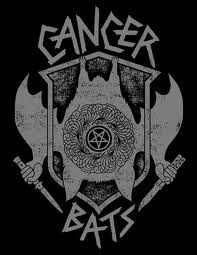 Canadian hardcore band Cancer Bats have released a video for their song “Bricks and Mortar” through Metal Hammer today.  The song comes off their last release called Dead Set On Living which was released last April on Metal Blade.

You can find the video by clicking right here

Dead Set On Living was the Bats’ fourth full length release and a follow up to their 2010 release Bears, Mayors, Scraps and Bones. They are about to embark on a December long UK tour which you can find dates for right here.