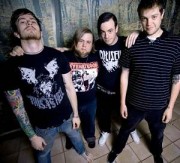 The one and only Cancer Bats have released a video for the song “Road Sick”.  The song is taken from their highly anticipated upcoming release called Dead Set On Living and can be seen right here.

Dead Set On Living is set to drop April 24, 2012 on Metal Blade Records.  This will be the Bats’ fourth studio recording and they have enlisted the help of legendary Vespa Studios and producers Eric Ratz and Kenny Luong.  You can get all the info on the release right here.