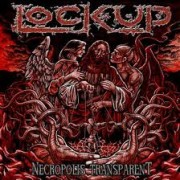 More News On Lock Up:

More On: Grindcore, Video, Lock Up, Nuclear Blast
share on: