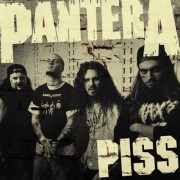 Yes, you read the headline correctly.  The iconic Pantera have literally found an unheard track called “Piss” that was recorded during the Vulgar Display of Power sessions and never made it on the finished record.  Whoa.  This is epic, they have even made a video for the track that you can find right here.

In order to make this video happen, Pantera put out an A.P.B. to all their fans asking for footage of them rocking out to Pantera or for them to show up at a video shoot in L.A..  The result is a brutal collage of Pantera fans rocking the fuck out and punching each other in the face in slow motion!

Pantera drummer Vinnie Paul Abbott recently had the following to say about the song “Piss”.

“‘Piss’ is the only unheard complete Pantera track in existence.  It was recorded at the same time as ‘Vulgar Display Of Power’ and it’s 100 percent Pantera with attitude and our signature groove! After mixing it, I can’t believe it didn’t make the record! So it’s 2012 and 20 years later and new Pantera music has been delivered.”

Dimebag would be proud.  It looks like this is the only new/old Pantera we’re ever going to get so enjoy.  The track is also available for purchase through all of the regular outlets.