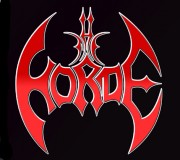 More News On The Horde:

More On: Thrash, Video, The Horde, Stormspell Records
share on: