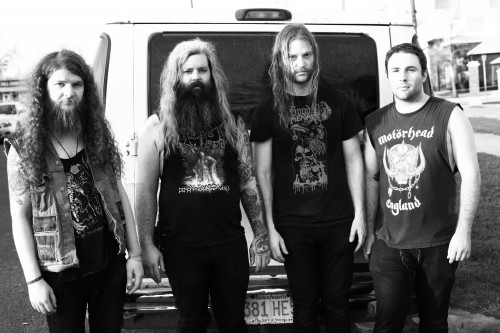 For those living along the east coast, the current cold front won’t be the only thing attacking your vitals this month — prepare to be blasted with menacing black metal from Brooklyn’s MUTILATION RITES as they join Full of Hell for a co-headlining run starting this weekend! Not only will audiences be presented with music from their critically-acclaimed Prosthetic debut Empyrean, an album included on multiple “Best Of 2012” lists (Decibel, Pitchfork), but they will also be privy to hearing new material from the band’s as-yet-untitled follow-up, scheduled to be recorded next month. Drummer Justin Ennis announced, “After a full year of working on material for our follow-up to Empyrean, we are prepared to etch it in stone. Once again our friend Kevin Bernstein (TRIAC) will be at the helm. This will be our fourth release documented with him at Developing Nations in Baltimore. After two years with us, these will also be the first recordings to feature Ryan Jones (ex-Today is the Day) on bass and vocals. He is a beast amongst men.”

The new album is scheduled to be released this summer via Prosthetic Records.

To further your excitement, Mutilation Rites have released a self-produced video showcasing the band performing two tracks live from the Union Pool in Brooklyn.