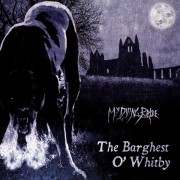 English gothic metal band, My Dying Bride, have announced they will be releasing a new album entitled “The Barghest O’ Whitby.” The album is to be released November 7th through Peaceville Records. “The Barghest O’ Whitby” was recorded at Futureworks Studios, Manchester with long-time production partner and engineer, Mags. The release is the first to feature violin/keyboardist Shaun Macgowan, and sees the return of Shaun “Winter“ Taylor Steels to the drum-stool for this recording.

More News On My Dying Bride: