MY RUIN release “Sacrosanctity” video from ‘The Cathartic Collection’ 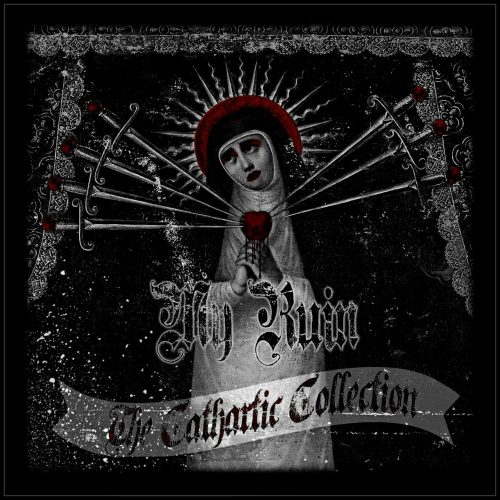 Alternative metal underground forces of nature MY RUIN have released a new video for “Sacrosanctity” from their recent essential 40 track retrospective collection The Cathartic Collection. Massive, domineering grooves, a scorching guitar solo section and of course the can’t be replicated aggressive vocal stylings of Tairrie B. Murphy welcome the listener back to the world of the influential band. Man, I miss their intensity and unique sound compared to a lot of bands today who think they are so brutal but don’t have a similarly fiery spirit to put the musical connection over the top. The band remain unique, empaths overflowing with anger and creative passion, channeling impossible levels of feeling into a cyclone of sound.

While sitting on a purple couch talking about music we felt a connection and I knew in that moment he would one day be my husband but first, he became my guitarist & musical partner in My Ruin. The rest is our rock story.
From the moment we met it was magick. We were drawn to each other the same way we were drawn to the music we have created together over the last two decades.

For some our music has been hellfire, for others holy water but for us, it has always been cathartic and something we consider sacrosanct.
On Christmas Eve 2020, Mick & I celebrated our 12 year wedding anniversary.

To commemorate our 20th anniversary and celebrate the music we have made in My Ruin,
we wanted to release something timeless, in loving memory for those who have followed us on our musical journey since the beginning and for those who may discover us at a later date…
…Over the years we have been told how much our music has meant to so many and this has always meant so much to us.

As an underground band, we have no mainstream, radio friendly greatest hits but we have made music that connects,

resonates and offers solace with its catharsis to those who need it. Including us.
“The Cathartic Collection” is a set of 36 songs which we have remastered and thoughtfully curated into 3 chapters from our extensive discography spanning our 9-album history in My Ruin.

Each 12-song chapter represents 3 albums and is introduced by its own spoken word interlude.
Our magnum opus begins with a new and a final song which we recorded at our home studio in Knoxville, Tennessee during the pandemic in 2020. “Sacrosanctity” is a poetically passionate, raw throated and relentless 6-minute metallic lament meant to represent our band, past to present…”
❤️⚔❤️
Tairrie B. Murphy