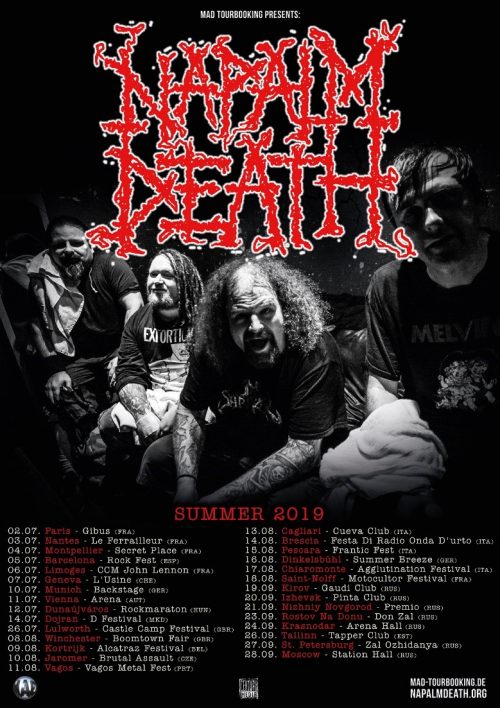 UK Grindcore pioneers NAPALM DEATH are currently working on a new studio album to follow up 2015’s acclaimed Apex Predator – Easy Meat effort as well as 2018’s Coded Smears And More Uncommon Slurs compilation release. NAPALM DEATH have just announced their next European tour run for the summer, a tour run in Russia in September, as well as a return to North America in October with Municipal Waste and label-mates Sick Of It All.

NAPALM DEATH’s frontman Mark “Barney” Greenway states about the upcoming tour, “The stinky van is calling again, and this summer looks to me like we’re reaching more parts of Europe than we have done in quite a few summers. Macedonia in July looks to be one that sticks out, as I recall that our last gig there was in the midst of the miserable Balkans war – it was that long ago. On another note, I know people are probably wondering about the next album. It is coming, we promise. Unforeseen circumstances and the kind of recurring touring schedule you see in front of your eyes have conspired to string it out quite a bit. It’s gonna be a multi-faceted rasper though, I think. Some nice ‘n’ quirky cover songs too. All will be revealed soon – just getting on with artwork and last couple of lyrics and all the usual window dressing. Alongside that, if it comes off, a nifty associated split release with a very-definitely-not-grindcore band is in the planning, which will neatly skip around convention and stereotype. And why not. Cheers all.”

Below is a list of all upcoming dates for NAPALM DEATH, kicking off with next week’s appearance at Germany’s Full Force festival. 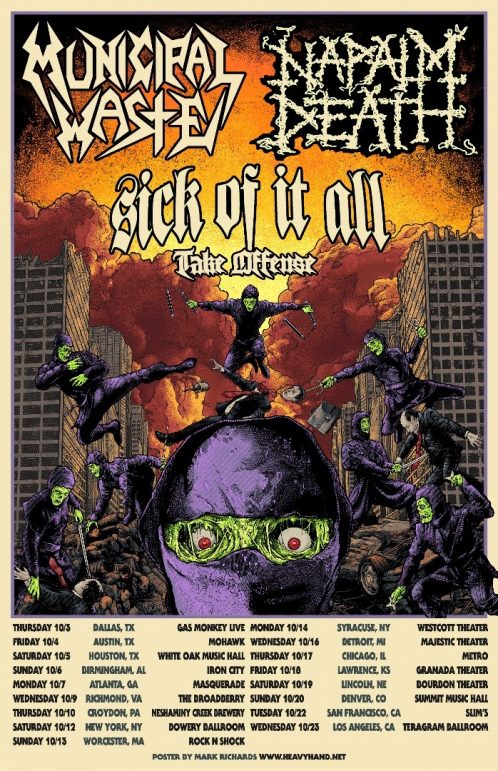