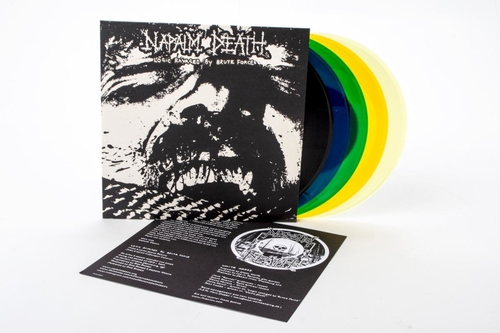 Grind legends and active political force in these horrific times Napalm Death are back with a digital EP and 7″ (love the brightly colored options), a very Napalm Death monickered Logic Ravaged By Brute Force release. Century Media put out this pit starter and it cheers me to see this in the same time period where I am gloomy from Barr destroying the justice apartment with his Baby Sinclair lookin’ ass face and the Senate’s own Palpatine , google eyed Mitch, shitting on the Constitution. It also super sucks what happened to Ke$ha this week with the defamation suit, so please stream and purchase her excellent High Road even if you are a grumbly metal fuck – she has supported metal before and is a rad lady who doesn’t deserve Dr. Puke’s bullshit. So yeah, we need to fight for logic and stop the brutes!

The release from the grind masters also kicks off their “Campaign For Musical Destruction” headline tour of Europe alongside EyeHateGod, Misery Index, Rotten Sound and Bat. That is a sick line-up! You lucky bastards over there better appreciate it and rage against some Brexit.

The EP includes a brand-new title-track as well as a freshly recorded cover version of “White Kross”, originally by Sonic Youth. The collectible Double-A-Side EP is also a first teaser for the band’s upcoming studio album, expected for release later in 2020. Sonic Youth covered by Napalm Death? I am losing my mind. How cool!

“In keeping with NAPALM DEATH custom, we had a vast swathe of new songs with many different flavors,” states NAPALM DEATH’s frontman Mark “Barney” Greenway about the EP: “So then naturally we moved into single territory and opted for ‘Logic Ravaged By Brute Force’. It’s the coldness and desperation of the guitar chords and voice that swung it. And then, seeing as Sonic Youth mash chords like few others, this cover of ‘White Kross’ just seemed to lift itself beyond the constraints of cover – or filler – song into a bit of a rumbling wall-of-sound epic”.

Hear it on Spotify HERE.