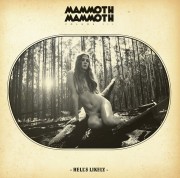 Napalm Records have announced the signing of Australia metal band MAMMOTH MAMMOTH. The release date for the bands inaugural album with Napalm Records, Volume III Hell´s Likely is set for release on November 27th in the States.

Frontman, Mikey Tucker commented:
“We’re thrilled to be partnering with Napalm Records. Their current roster of Monster Magnet, Brandt Bjork, Karma to Burn, to name a few – showcase their dedication to the rock scene across the globe.

We are also very excited about the new opportunities that this signing will bring to help spread MAMMOTH MAMMOTH to the rest of the world.

We have many loyal fans in Europe, Scandinavia and South America, so this new partnership will enable us to smash stages outside of Australia with our first European tour penciled in for mid 2013. So lock up your goats and call your lawyer coz, we’re coming to a town near you.”