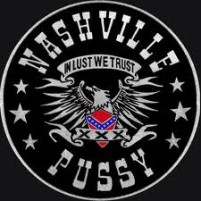 Atlanta hard rock band Nashville Pussy have released the track listing for their upcoming album Up the Dosage. The album will be a follow-up to the bands 2009 album From Hell to Texas and is set for release on January 21st in North America

Vocalist/Guitarist Blaine Cartwright had the following to say about the album: “None of the previous Nashville Pussy albums have been as diverse and at the same time consistent Everything sounds even bigger and better, yet raw and authentic through and through. This is our ‘Back In Black’!”