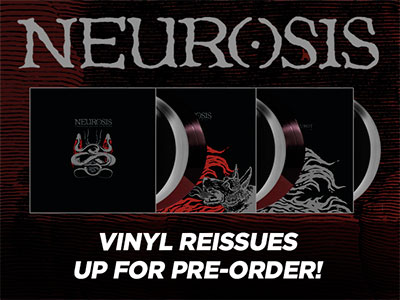 Oh yeah! Went to a great Murder By Death show last night and I’m opening for Jake E. Lee’s Red Dragon Cartel tonight but thought I’d do a little Metal Riot work first. Such sweet news for this Friday to help you start your weekend right. This from camp Relapse just in:

As the next chapter in Relapse Records’ ongoing 25th anniversary commemoration, heavy music visionaries NEUROSIS will have two of their most revered and long out-of-print titles reissued on super deluxe 180-gram double vinyl this fall. Through Silver in Blood (1996), which Fact Magazine recently deemed the #1 best post-metal album of all time, has not been printed on vinyl in ten years, while Times of Grace (1999) is seeing its first pressing in over fifteen years. Additionally, Grace, the 1999 Tribes of Neurot companion piece to Times of Grace, will also see a deluxe Relapse reissue, its first time ever on vinyl.

Each reissue will contain reinterpretations of the original iconic artwork and will be housed in heavy duty “tip-on” jackets and will be available in a variety of limited edition exclusive colors. The reissues are set for worldwide release  September 4th  and will also include full album digital download codes. Preorders for all of the editions can be currently found HERE.