Neurosis stream remastered “The Word As Law” ahead of weekend release 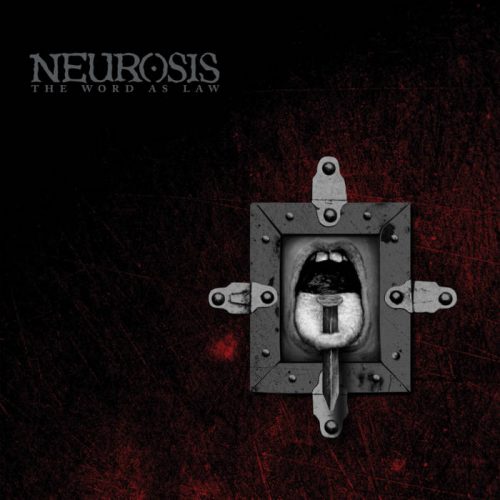 Neurosis are (and always likely will be) the reigning post-metal champs, a term that falls far short of capturing a sound that reaches into the depths with claw tipped roots, crosses the oceans with the spirit of the wanderer and screams at the heavens as the vastness of the void evokes awe, fear and desire. The seeds of their future were first sewn on the long out of print The Word As Law, a record that has been their most underground classic for too long. Seriously, for the longest time my friend Matto from Peterwalkee Records was the only East Coast punk besides me I knew who had even heard it.

Today Neurosis are streaming the record in full on their bandcamp, remastered by Shellac’s Bob Weston and featuring updated and tweaked art from Josh Graham that fits in nicely next to their other reissues and current ‘look’. But again, they were already anticipating “Tomorrow’s Reality” and the record itself settles in perfectly in their development to the listener while able to hang toe to toe with ANY of this years often ‘so-called’ hardcore albums.

“To What End” alone is so ahead of the curve it is almost laughable how long it took many other bands to catch on. This record perfectly combines their early punk rage with a more experimental hardcore approach (def feel the Rudimentary Peni influence they always talk about on some of these numbers). Pretty sure this is the first one with Von Till and their are no keys but man, the cool guitar tones and those punk ass basslines slay. This record has so much to offer new generations and hopefully many people will discover it again.

Much like my favorite Beatles album Revolver, you can hear the band having breakthrough after breakthrough as artists in real time.

Stream the entire album early at the Neurot Recordings Bandcamp HERE, and find merch bundles through the Neurot webstore at THIS LOCATION.