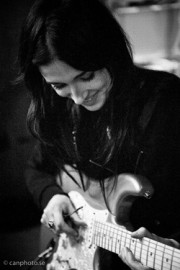 Nevermore‘s Jim Shepard underwent brain surgery in February for a benign brain tumor, leaving a void before the band headed on a European trek. The Seattle natives have chosen One Undone’s Dagna Barrera to fill that gap until Shepard can return. She has previously worked on vocalist Warrel Dane’s solo project.

Jim Shepard has left the band due to medical reasons before, but has managed to reclaim his spot once healthy. The band is currently touring in support of their latest album “The Obsidian Conspiracy,” released last year by Century Media.