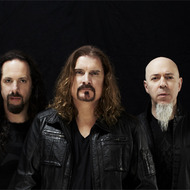 Renowned progressive metal outfit Dream Theater are set to release their latest record on September 24th via Roadrunner. Surprisingly, after a nearly three decade career, they’re finally doing a self-titled album. The lineup for Dream Theater is as follows: John Petrucci on guitar, John Myung on bass, James LaBrie on vocals, Jordan Rudess on keyboards and continuum, and Mike Mangini on drums. After drummer Mike Portnoy’s departure back in 2010, this is the first record to have new drummer Mangini fully integrated in the creative process.

Petrucci had this to say about the new record:

“I see every new album as an opportunity to start over. To either build or improve upon a direction that has been evolving over time or to completely break new ground. This is the first self-titled album of our career and there is nothing I can think of that makes a statement of musical and creative identity stronger than that. We’ve fully explored all of the elements that make us unique, from the epic and intense to the atmospheric and cinematic. We’re incredibly excited about Dream Theater and can’t wait for everyone to hear it.”