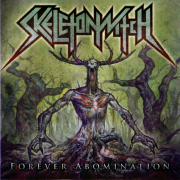 While this isn’t exactly a “new” song, Skeletonwitch have just released “Tragedy Of Days” for streaming and download.  The song was originally featured on the album At One With The Shadows back in 2004, but the band had a chance to re-record it during the Forever Abomination sessions and you can most definitely hear the difference.  To listen for yourself click here.

A recent press release had this to say about the origins of the song:

“‘Tragedy of Days’ was an epic instrumental by [guitarist] Nate [Garnette]’s former band Serkesoron. They disbanded after the untimely passing of Serkesoron’s frontman, Thom Wright. Shortly after the band called it quits, Skeletonwitch was born. We re-recorded the track and Chance [Garnette] added vocals as a tribute to Thom, immortalizing him in song.”