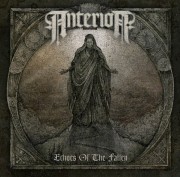 Welch melodic death metal Anterior have just launched their third and final single “To Live Not Remain” from their upcoming second album “Echoes Of The Fallen” exclusively on Thrashhits.com. Check it out here.

Set for release in Europe on August 26th, the UK August 29th, and North America on September 13 via Metal Blade Records, the 10-track long player was recorded at Grindstone Studios through 2011 with Scott Atkins producing.

Check out Anterior have launched a landing page where you can check into pre-order options as well as listening to the first single from “Echoes Of The Fallen”. You can also get further details regarding the new album right here.