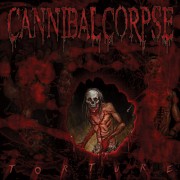 Last month, death metal monoliths Cannibal Corpse announced the release of upcoming album Torture from Metal Blade. Now, in an attempt to squelch anticipation, they give us Scourge of Iron.

Bassist Alex Webster had this to say: “Scourge of Iron helps to show the song writing diversity on Torture. Demented Aggression is blazing fast and frantic, while Scourge… is a down tempo, pounding song. They’re both death metal, but at opposite ends of the speed spectrum. Expect to hear this kind of variety throughout Torture. We’ve utilized many different tempos, rhythms, and feels in these songs with the goal of making an album that is varied and dynamic but also very brutal. On March 13th you’ll get to decide whether or not we succeeded.”