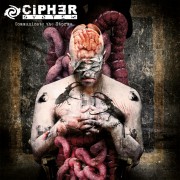 Progressive melodic death metal outfit, Cipher System, has made another song off their upcoming album “Communicate The Storms” available for streaming. Check out the track “Forget To Forgive” over on their Facebook page here.