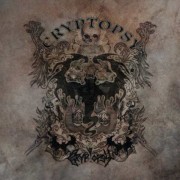 Canadian technical death metalers Cryptopsy are streaming a new song from their upcoming self-titled album.  The song is called “The Golden Square Mile” and has been described by the band as follows:

“The song deals with an unexplained killing that took place in Montreal. This is the song that CRYPTOPSY will most likely choose for their first video of this new release. It’s also the only song in which all of the musicians took part in writing, including ex-member Youri Raymond. Hope you enjoy!”

You can find “The Golden Square Mile” streaming by clicking right here. You can also check out “Two Pound Torch” and “Red Skinned Scapegoat,”two previously released songs from the album right here.

This album will be Cryptopsy’s seventh full length album and the follow up to 2008’s The Unspoken King.  It is due for Century Media release September 14, 2012.[youtube]http://www.youtube.com/watch?v=iRH5A45Tang[/youtube]