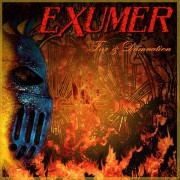 New York’s Exumer are unveiling the third single from Fire & Damnation on AOL’s Noisecreep.com. “The Weakest Limb” is the latest in a batch of singles to be heard from the album including “Vermin of the Sky” and “Fire & Damnation“. Fire & Damnation is set to be released worldwide by Metal Blade Records on April 10th in North America and April 6th/10th in Europe/UK.

Vocalist Mem V. Stein comments: “We have been waiting for this moment for a long, long time! It’s a huge milestone in our career to return to Brazil after 24 years, where there are numerous online communities that wholeheartedly embrace Exhumer and where our fans have been loyally following us since our first appearances in the 1980s. There could hardly be a more cult tour package, between Exhumer and Artillery, to hit South America and the timing could not be better for us to return there shortly after the release of our new album.”