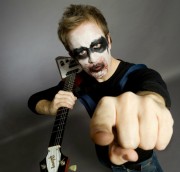 Once again proving that he can rock and make cartoons with the best of ’em, Brendon Small has released another new track from his side project Galaktikon.  “Prophecy of the Lazer Witch” is the third single to surface so far and can be heard over here.

Small has also announced the official release date for the Galaktikon album as April 24, 2012. He’s called this album an “audio comic book” and stated that it will be much more melodic than a Dethklok album.

To read more about the music, including what caused this album to be recorded, and find the first two singles check out these links here and here.