New music: Goatwhore – “Collapse in Eternal Worth” from upcoming “Blood for the Master;” Album details and art 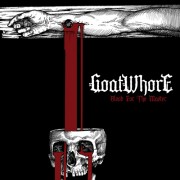 New Orleans black metallers Goatwhore let some new blood out with the release of “Collapse in Eternal Worth,” which is now available for download. The track is taken from their upcoming fifth release, “Blood for the Master,” which is due out on February 14, Valentine’s Day, from the mighty Metal Blade Records. What a great gift *hint hint.*

The first single off the album, “Collapse in Eternal Worth,” along with ‘In the Studio’ video footage is now live at MetalBlade.com/Goatwhore. Recorded in St. Petersburg, FL at Mana Studios, Goatwhore once again joined forces with producer Erik Rutan (Hate Eternal, Cannibal Corpse, Agnostic Front )to usher in the newest release at the forefront of 2012.

Goatwhore – Blood for the Master

1. Collapse in Eternal Worth
2. When Steel and Bone Meet
3. Parasitic Scriptures of the Sacred Word
4. In Deathless Tradition
5. Judgement of the Bleeding Crown
6. Embodiment of this Bitter Chaos
7. Beyond the Spell of Discontent
8. Death to the Architects of Heaven
9. An End to Nothing
10. My Name is Frightful Among the Believers