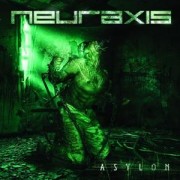 Due out next week, Canada’s death metal band Neuraxis is streaming their latest release “Asylon” online now. This is their sixth studio album and it will be released on February 15th from Prosthetic Records. “Asylon” was recorded at Wildsound Studio with producer Chris Donaldson (Cryptopsy, The Last Felony, The Agonist). The cover art was created by artist Dennis Sibeijn of Damnengine Artwork, who worked with the band on their previous album, “The Thin Line Between,” as well with Job For A Cowboy, Chimaira and more.