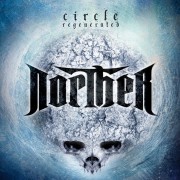 Finnish  death/black metalers, Norther, is set to release their latest album, “Circle Regenerated” with new vocalist, Aleksi Sihvonen. Slated for an April 19th release on Century Media Records, the band is offering fans a 4-minute peek at several of the new tracks, available on their Facebook page.

The departure of vocalist / guitarist Petri Lindroos (now in Ensiferum) in 2009 called for Norther to revamp their lineup with former Imperanon frontman, Aleksi Sihvonen, and Naildown guitarist Daniel Freyburg.

“Circle Regenerated” is the follow-up to 2008’s “N”, which took the band to #5 on Finland’s official album charts.