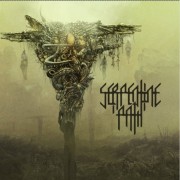 Doom metal “supergroup” Serpenrine Path are streaming the songs “Obsoletion,” “Only A Monolith Remains,” and “Crotalus Horridus Horridus” from their upcoming self titled release.  If you’ve never heard of these guys, the band consists of Tim Bagshaw the guitarist for Ramesses and founding member of Electric Wizard along with all the guys from Unearthly Trance.

Serpentine Path will be released via Relapse on September 11, 2012 in the States, September 17th in the rest of the world.