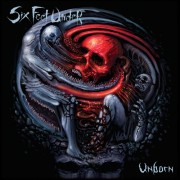 Tampa death metal heads Six Feet Under have released another new song from their upcoming alum Unborn.  The song is called “Neuro Osmosis” and the album is due out March 19th under Metal Blade.

You can find the track streaming via PureGrainAudio.com right here.

Unborn will be the follow up to last year’s Undead and is the band’s tenth studio album.  You can find the first single called “Zombie Blood Curse” right here.