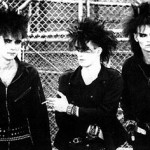 Industrial legends Skinny Puppy are back with their 14th album, dubbed hanDover. Due October 25th, this is the Canadian band’s first album in four years, due to label issues.

“It’s definitely the overarching feel of ‘bend over and take it,'” offers vocalist Nivek Ogre, only half-kidding about the album’s theme. “I recently listened to the record and it’s making even more sense to me. We’re certainly experiencing the rape of mankind as the world’s economies slide even further and the inability of people to look around them and see what’s going on. You’re starting to see a neo-feudalistic empire on the rise. People are getting so pissed off, they’re turning on each other.”