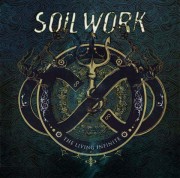 The Living Infinite will arrive on March 5th on Nuclear Blast and is the follow-up to 2010′s The Panic Broadcast.  It will be the band’s ninth studio album and first double album.  This also marks the recording debut of longtime touring guitarist David Andersson.[youtube]http://www.youtube.com/watch?v=LR2C2kEONIU[/youtube]