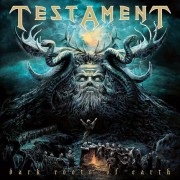 Bay area thrash icons Testament have released a brand new song called “True American Hate” taken from their upcoming release Dark Roots Of Earth.  The album is due out July 31, 2012 via Nuclear Blast.

“[It] was kind of inspired by when we sent all our troops overseas, and we were just seeing in the news when all that was going on a lot of young kids, under 10 years old, out there with their families burning American flags. And that was a pretty shocking thing to see, to see that generation, a kid that young being taught to hate that much. It makes you think what’s going to happen, 10 to 15 years from now, when the majority of these kids have just been raised to hate. It struck me as a little odd.”

Yeah Chuck, we’re all pretty much fucking doomed.  At least you get it, it’s too bad that more don’t.