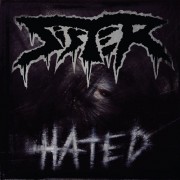 “The video for “Bullshit & Backstabbing” is the first video we’ve done with a crew behind the cameras. The song is a favourite of the album HATED for all of us in the band and it felt right to make a video of it. We found a greasy spot to shoot it at and got to work. Like always we wanted to keep it on a basic level and just do a video with what Sister is all about Just deliver the punk rock we’ve always done. This is what we do and the video crew Bröderna Blom and Tinnerholm got it down and made it sick. Check it! Ps No animals were seriously harmed during the shooting of this video!”