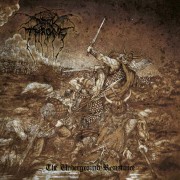 “True” Norwegian black metal band Darkthrone have released an edited version of a song from their upcoming album The Underground Resistance.  The song is called “Leave No Cross Unturned” and is due out February 26 via Peaceville Records.

The Underground Resistance is Darkthrone’s 15th studio album and their first release since 2010’s Circle the Wagons.  The album was written and recorded over two years by the band members. It was mastered by Jack Control at Enormous Door in Texas and artwork was done by artist Jim Fitzpatrick.

To read statements on the album by the band members click here.

Drummer, guitarist, bassist, and backing vocalist Fenriz had the following to say:

“Three songs each, Ted’s are flown from the universe of metal with his strongest voice ever so far. Songs of mine are torn from the wombs of the riders of rohan of metal, safely cradled in 1985 style.”To read statements on the album by the band members you can click here.

“I can’t speak for Fenriz, but I think he’s going for more epic lyrics. I can only speak for myself and this time around they are very personal lyrics. It’s the first time I’ve ever tried this and it’s difficult to do it nicely and put it into good words. There was a lot of hate and people trying to ruin your day and I had stuff to say for my sake.”