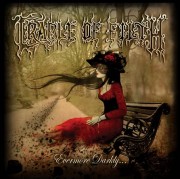 The UK’s premier extreme metal antagonists Cradle of Filth return with their new mini-album entitled “Evermore Darkly” which includes an accompanying DVD with documentary and full live performance. The CD/DVD package features new tracks and rarities, with a lengthy on-the-road documentary and a full live set filmed live at this year’s Graspop metal meet in Belgium, as well as the video for “Lilith Immaculate”.

More News On Cradle Of Filth: