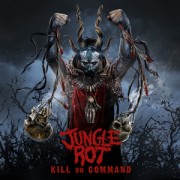 Wisconsin Death Metal act Jungle Rot has released their new video for the song “Rise Up and Revolt.”  This song is from their upcoming full-length album “Kill On Command” which is due for release on June 21st through Victory Records.  Jungle Rot was just recently signed to Victory Records, you can watch their introduction video here.

To watch the new music video for “Rise Up and Revolt” click here.