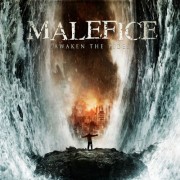 English metal stalwarts Malefice are proud to premiere their new video; the title track from Awaken The Tides! The video is live now HERE. The music video was shot at the Hack Green Nuclear Bunker in Cheshire, UK, which played a pivotal role in the defence of Britain for over 60 years. The video was directed by Stuart Birchall, produced by You Know Ltd, with post production by Alex Dunn and cinematography by Rob Wilton.

Set for release in Europe on July 18 and North America on August 2 via Metal Blade Records, the 10-track long player was recorded at The Face, Reading with drums laid down at Fortress Studios, London. All tracks were mixed and mastered by Justin Hill.