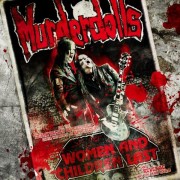 Murderdolls’ Wednesday 13 sat down with UK’s Sonic Shocks for a video interview while on their first European tour in more than six years.

Wednesday 13  discussed the amped up crowds and reception they’ve been getting throughout Europe. He also spent some time discussing their critically acclaimed latest album, “Women And Children Last,” released on Roadrunner records.

“Women And Children Last” pushed its way up to number 43 on the Billboard 200 chart in its first week of release.