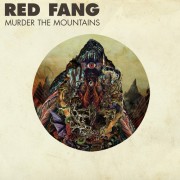 While we weren’t too pleased with Red Fang‘s last album Murder the Mountains, their intial burst onto the music scene was with the hilarious video for “Prehistoric Dog.” The gang has figured out that funny equals money, so the new track “Hank is Dead” sees the band try their hand at slapstick again.

The video starts with a man drinking a beer in a shower (a personal favorite activity of mine) and sees the band head to an Air Guitar battle for the ages.

Click here to see if Red Fang has topped themselves!