Danish folk metal masterminds, Svartsot, have just released a teaser video for their upcoming album “Maledictus Eris”. The teaser includes the album artwork, promo pics and of course some new tunes from one of Denmark’s finest bands. Check out the video, full cover art, and track listing here.

Set to release via Napalm Records in most of Europe at the end of July and early August and in the U.S. on August 8th, the band had this to say about their upcoming third full-length release: “We are proud to be able to release the cover artwork and tracklist for the third Svartsot album; “Maledictus Eris”. As previously announced the album recounts the tale of the Black Death’s incursion into Danish history from 1349 to 1350. The album begins the tale just prior to the plague’s arrival through to when the first bout relinquished it’s grasp, and focuses on the way the epidemic affected the population – from victim to survivor. We have taken more inspiration from medieval music than on previous albums, and the feel of the album in general has taken a darker and more emotive turn on this recording. We are extremely satisfied with the way this album has turned out and hope that the fans – both old and new – will take kindly to it. But at the same time, we should make clear that this album is somewhat different to its predecessors, and not for the worse as far as we are concerned.” 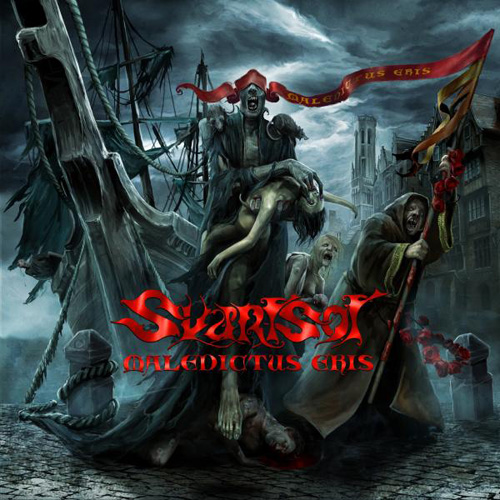 Gyula Havancsák‘s cover is most worthy of an Album Cover Art of the Week nomination!