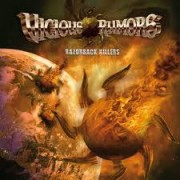 California heavy metal band Vicious Rumors posted a new video for the track “Murderball,” the song comes off  their “Razorback Killers” album, which was released in  March 2011, on Steamhammer.