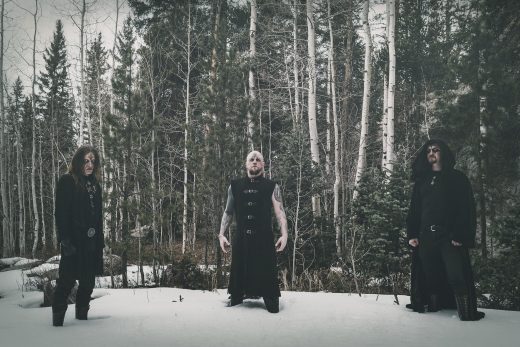 American black metal band Nightbringer have released their latest opus Terra Damnata, one of the highest hopes of the year for the genre. It does not let the listener down, a lengthy meditation on the dying world in the age of Kali with many passages that blaze by faster than you can say Austin Osman Spare while choking yourself. It has some of the most unrepentant passages of sheer assailment I have heard on any black metal since perhaps 1349’s recent primarily ferocious Massive Cauldron Of Chaos but the guitar playing here is way more experimental for the most part.

The record releases today, in case you weren’t already spending most of your day with the new Kendrick album and want to be actually damned, not just say DAMN. Blasting this is also a great way to piss off Jesus freaks on Good Friday. Stream Terra Damnata HERE or at Bandcamp HERE. I’m really enjoying the end sections of “Midnight’s Crown” past the 4:11 mark where things get downright Emperor level grandiose. Bad ass.

Regarding the album, vocalist Naas Alcameth comments: “With Terra Damnata we have tread even deeper into the labyrinth of certain esoteric traditions and sacred mythos, closer to the heart of the living darkness that destroys all and liberates but few. The spirit of the album is one of an ever backwards turning and embracing of both terror and ecstasis, love and death, before the gods and daemons of the Age of Misrule.”