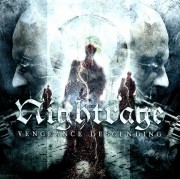 Nightrage dips into the past with this double-disc released today from Century Media. The package contains the Greek quintet’s “Sweet Vengeance” from 2003 and “Descent Into Chaos” from 2005. Also included are detailed liner notes by Tomas Lindberg (At The Gates), Marios Iliopoulos, Fredrik Nordström (Dream Evil, producer of At The Gates), In Flames, Dark Tranquillity, etc.) and Gus G. (Ozzy Osbourne, Firewind) as well as new artwork by Gustavo Sazes (Arch Enemy, The Crown, Firewind, Dream Evil and more). Another exclusive to this release is a previously unreleased track named “Gallant Deeds” featuring lead vocals by Mikael Stanne from Dark Tranquillity.

Nightrage released “Wearing a Martyr’s Crown” August 4th, 2009. Kerrang! lauded their current album stating the band “finds undeviating strength by looking back to a time when the Gothenburg-sound was at its peak to create one of the most jaw dropping metal releases of 2009!” Currently, the band is writing songs for the follow up album. An official due date has not been set.