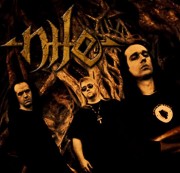 South Carolinian death mettallers, Nile, have recently announced a string of Asian tour dates. The tour will last from April 26th through May 6th as they play in four different countries. The band has also announced they are working on a new album entitled “At The Gate Of Sethu,” and will be produced by Neil Kernon.

The new album is expected to be released the second half of 2012 through Nuclear Blast.