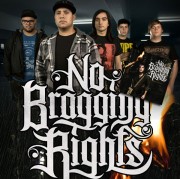 **No Bagging Rights also has the following upcoming shows with Lionheart, Volumes and Naysayer in March and April:**

More News On No Bragging Rights: