No, “woke culture” is not killing your heavy metal. You’re just a jackass. 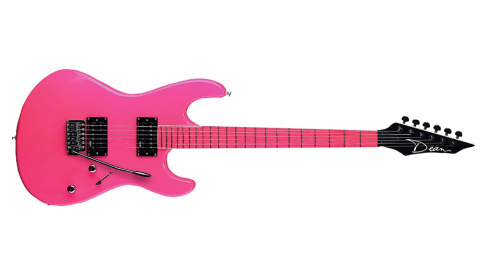 “I am a pink guitar and threaten grown ass men”

So I was on the old Fartbook today when I saw a post from the band Lecherous Nocturne. Always thought they were pretty decent from what I had heard, though I was definitely a casual fan and not an expert on this group. I noticed the band had made a statement they were going to stop using Facebook. Due to censorship.

Fair game. Facebook and a lot of tech companies are VERY bad at actually moderating their platforms for homophobia, doxxing or all manner of shit. They have algorithms which can’t tell the difference between Murphy’s Law and fuckin’ Skrewdriver. I will be the first to acknowledge that. I even know someone who wrote about a type of dessert they didn’t like and caught a Facebook ban for it! Not even joking.

My own gf the psych folk artist Globelamp was a Swiftie who was doxxed by Taylor Swift fans on Twitter for “turning on her” by criticizing Taylor headlining Amazon Prime day during a worker’s strike (among other things). Oh, and for trying to get Taylor not to work with a label conglomerate – Secretly Group- and their outrage selective ladder climbing artists (cough…Skeevy Bridgers, Cherry Glazzer, Bright Eyes and many more) which help lend cred to labels that shield her “alleged” – I have to include that phrase even though I know he is a complete fucking scumbag – abuser. Instead she lost her account for blocking too many of them and for them reporting her in bad faith- with no appeal- even though she was verified. And tons of people from the ‘silence breaker’ fandom were mocking her abuse story and saying she was a liar and Taylor doesn’t know that label…which she now has collabed with like three artists and counting from for indie clout. Fuck y’all.

So suffice to say, my partner cares a lot about freedom of speech and is more wary of deplatforming than I am. I am all for it in the case of a Milo or some other fash apologist, though I also think we should have paths to redemption in society for truly apologetic people… as long as they weren’t whining on Bill Maher too many times, haha. Cuz that dude has become a fucking joke and an edgelord slob compared to his better days (Bill, not Milo. Milo has always been fash trash).

AND I fully understand all the nuances around the debate that sometimes people like Bernie or whoever will go on not the best platforms, not so much to lend them revenue or credibility, but to try to reach people who they hope they can change the minds of with info that cuts through their usual propaganda bias consumption.

But anyway, back to Facebook. So then I notice that some trucknuts in the Lecherous Nocturne comments leaves them a response: ‘Woke culture is AntiMetal. Stay Brutal.” Which I am pretty sure a band member liked.

Oh Jeez. Fucking gimme a break, dorks. Here comes some brutal truth. If ‘Woke Culture’ is killing your metal boner by pointing out we can be more inclusive and evolve and fucking not be stuck in 2nd wave black metal forever or pornogrind mutilation of women art like we just freshly popped zits on our faces and the pus got all over the severed booby drawings on our 6th grade class binder in 199-wank, maybe you actually just aged into the Cialis-bracket anyway.

I am sorry, for the 8 millionth time, that D666 fans might have to have some self-reflection these days before cheering when the singer calls people ‘pooftahs’. Fuck off.

A gay man named Rob is more metal than any of the rest of us will ever be. Literally ever.

Fact checking Donald Trump for blatant disinfo is not the same as your rights being taken away, however. And yes, I am aware that it can also lead to abuse of power if a precedent was set and suddenly someone decided to say the sky is orange and not blue and fact check me if I say it is blue, but then I would advise my confused friends to…look up.

Sorry you might get called out in 2021 if you try to have a fucking Confederate Flag on your merch or guitar, kids. That doesn’t mean their aren’t metal lefties like me who have seen Gwar sixteen times and can put their jokes into context (except for, y’know, touring with Madball during a pandemic. They must really want to end the human race after all, hahaha). What? That’s offensive? How do you propose we solve this?

I have been a hot mess many times in my life and guess what? Have worked hard to improve. Being criticized for something doesn’t mean all metal is suddenly your wimpy idea of a vegan, or something…which, it frankly should be. Nothing goes against the status quo more than NOT participating in the factory farming, chemical induced destruction of the world and celebrating a primal respect for nature.

I was reading about how comics legend Frank Miller was dropped from Thought Bubble due to participants rightfully remaining uncomfortable with his abysmal Holy Terror Islamophobic rabid dog-era. A time when he really lost the plot and caused serious harm.

I was a huge Miller fan for years and met him at a signing around when the first Sin City came out. Caroline Keene Kelley is my favorite (and the first female) Robin. What I am saying is people can do good and bad in their lives. and even get better over time or come back from bad decisions. Or make new, inclusive art. Cursed for Netflix was terrific and I am bummed it was over after one season, for example.

Anyway, this utter fucking dipshit at Bleeding Fool (wow, what an original name) wrote some clowncar piece saying how everyone against his convention appearance had pronouns in their bio. Jamison Ashley writes: “Could there be any correlation between those who virtue signal their preferred pronouns and the easily triggered, emotionally immature, adult-children who require public safe spaces?”

I am linking to it above because I actually want you all to see how fucking dumb they sound and also not be accused of “keeping them down” or being a coward, but suffice to say some of it is triggering to some, if not more so just annoying af and idiotic.

First of all, ‘virtue signal’ is a fucking alt-right seeded phrase to discredit the importance of social justice movements as trivial and disingenuous. Secondly, even Miller has said he can barely look at Holy Terror anymore and not see it as consumed by anger and that he also wasn’t thinking well during the time he attacked Occupy Wall Street. Last I checked I was AMAB and am an enby person currently GROWING FUCKING TITS and when I look under them I can still see the faded Sin City Miho tat taking up my entire ribs on the right side of my body . S/O to Devon Aoki. But GUESS WHAT?!! It is easy to admire some of Frank’s work and also to not be cool with Holy Terror, which was a toxic shitshow.

I donate monthly to Ilhan Abdullahi Omar and think she is one of the most important politicians in modern society and I can still appreciate some of Frank’s Daredevil run and also be disgusted by Holy Terror. See how that works?

Stop generalizing. You edgelord fucks hate it when people do it but then you perpetuate it with your ‘the woke mob’ bullshit. No group of people is a monolith. Most do some good and some bad, but aren’t all exactly equivalent in evil. AND in many cases you are called out for being an asshole, which is social consequences. Metal doesn’t mean no one will ever think you are a prick if you…are one?

Chances are you might not even be ‘cancelled’ forever if you genuinely aren’t just a defensive shit.

If you think metal is dead because of inclusiveness and ‘woke culture’ you clearly haven’t noticed that the best black metal lately has been indigenous or trans or includes cis women or is Zeal & Ardor. Seriously, shut the fuck up and listen to more Feminazgul.

And yes, even Gwar.