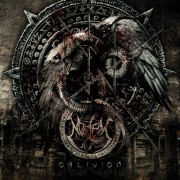 Spanish extreme metal act, Noctem, have announced that they will release  their current album “Oblivion” in North America. The album was produced by Daniel Cardoso and recorded in the Ultrasound Studios 2 in Moita, Portugal.

The album is set to be released October 25th through Metal Blade Records.