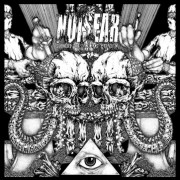 New Mexico grindcore band Noisear has recently completed work on their Relapse Records debut, “Subvert The Dominant Paradigm.” The follow-up album to “Pyroclastic Annihilation” is set for a February 1st North American release date and is available for pre-order at the Relapse Records web store. “Subvert The Dominant Paradigm” features 30 brand new tracks from the band and will be available on CD, LP, and digitally.

Noisear has recently seen the release of a split 7” EP with Sweden’s The Arson Project that includes four new track from each band. Noisear’s side of the split is currently streaming in its entirety via StereoKiller.com.

The band has confirmed a local show in Albuquerque, NM at The Launchpad for December 18th and is currently booking a May 2011 U.S. tour around their performance as part of Maryland Deathfest.