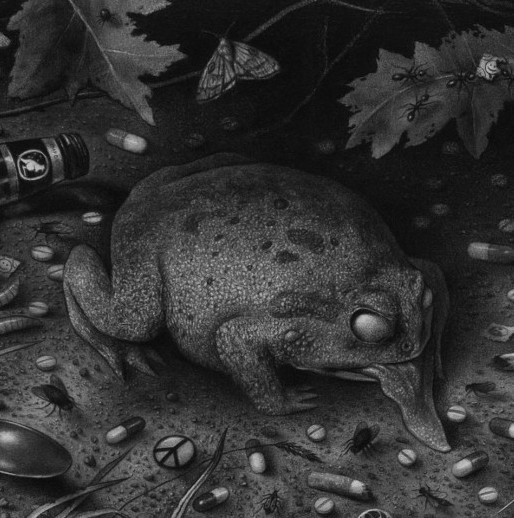 If you want to have your day or night irrevocably changed, like entering into a magical and demented forest from which you might not return for a hundred years, look no further than the third release from Norway’s saturnine prog force Tusmørke. Fort Bak Lyset is the album in question, a veritable circus of odd riffs, vertiginous chanting, danceable merry making and impishness on a profound scale. Svart Records is lucky to be releasing this insanity on the masses, dangling a truly adventurous musical carrot out there for the brave souls willing to follow the super weird music into the laughing forest.

Enlightened psychedelic progenitors Benediktator, Krizla and the phenomenon Marxo Solinas speak to us today from a realm of imagination so that we might glimpse a slight understanding of the inner workings of this peculiar and splendid group’s latest.

Hello and how are you today? Judging from your album art…do you start the day with psychedelic drugs or just orange juice and sunshine?

B: Oh, fine, fine, bit of a cold, just returning from a great concert in Stavanger, we brought our entire families and rented a small house for a night. Yes, Norwegians think “how are you” is an actual question. I start the day with coffee, always coffee. If there’s no coffee, I’ll have maté. Failing that, it’s back to bed.

That is what I am like! Without sounding like a rude, dumb American…I cannot understand a word of what you are singing. It could be crazy propaganda, haha. Just kidding. Can you tell me what some of the songs are about?

B: Some of the songs are giving ancient local folklore a twist and an update, others are concerned with the mysteries of the after-life or the joys of skiing. We’ve included English translations in the booklet for the CD and LP, seeing as how our lyrics are extremely important for us. It’s not all gibberish.

‘Et Djevelsk Mareritt’ is so cool, like a folky dream and then it has that boogie part that reminds me of the Bee Gees meets like Grand Funk Railroad or something. Of course because of instruments people probably are lazy and mention Jethro Tull a lot. What were some of your bigger influences?

B: The bass is inspired by Turkish psychedelic funk from the 70s, like Baris Manco, Erkin Koray or Edip Ekbayram.

K: The biggest influence to this song when I wrote it was this vision of demons in animal shape taunting me with my failures. A medieval flute and glockenspiel felt appropriate, inspired by what I imagine as fairy tale music, Gryphon being a band in that vein. The chorus is more of a Norwegian 70’s hard rock and funk thing, akin to the band Høst. Some of the instrumental part is from Irish folk music and some from funk, I like some of Herbie Mann’s stuff, that was probably an influence, too. I practised the recorder and glockenspiel hook during Christmas, driving my neighbours crazy. It is a true theme for demonic possession.

What was the process like recording this album? Did you do much live tracking or seperate takes? There is a lot going on. I like that you have longer instrumental passages like Goblin or other prog bands, where it really opens up.

B: The bass, drums and Hammond organ were recorded live, with the flute playing along and being dubbed later. These sessions took place over a weekend in the country, in a studio with views of magnificent mountains. The panelling, floor and ceiling are all wood, it’s like playing in a cigar box. The vocals and additional synthesizers were recorded later, along with some overdubs, in the Phenomenon Marxo Solinas’ apartment in Tøyen, a part of Oslo where criminals live. Yes, that is an Alan Partridge reference. I’m not having a go.

‘De Reiser Fra Oss’ makes my skin itch and feel like I am in an outer space spaghetti western. It has these cool drums and vocals at first that remind me of Ennio Morricone and then it turns into this like Oslo forest disco rock jam. Do you all place a lot of trust in one another as writers?

B: Mmmm, yes, we do, but at the same time the main writer of the song has the final say. Often you have ideas for all the instruments in your head and people have to put up with being told what to play. We do like everyone to feel that they can contribute, though. Even though they can’t always, really.

K: The songs for this album come from a lot of different periods. I based that particular song on an ancient riff I made twenty years ago for organ. The chorus came out of jam sessions on that riff. Then I spent a few weeks humming and whistling to make out the intro part and mid-section, arranging the song as all elements fell into place. The vision of the song was outer space and doom, with alien sounds and a threatening vocalising chorus. As with my other songs on this album, I made a demo for the song on a four track before introducing it to the band, and then it was fleshed out and expanded or contracted to make the dramatic curve of the arrangement fit the main idea. There is trust in the writer of any of our songs, but sometimes the songs take on a life of their own. Some of the demos I made in this period were changed substantially. Vinterblot, for instance, was never meant to be a funky number, but the arrangement resulting from playing it with a full band made it inevitable. Although I was reluctant at first, the boys had so much fun playing it that way, that I couldn’t resist.

Do you find it exciting to see people caring a lot about vinyl and rock n roll history again? At least in the underground or on HBO? Is this happening in your country as well?

B: Yeah, records on vinyl are a big thing here. Frankly, I prefer it the way it was, as an outsider thing with record fairs, hole in the wall records stores and seedy second hand shops crammed with used porno mags and Bonnie Tyler maxi singles. No, wait, maybe I don’t. Mainly, I don’t want regular people cramping my style and getting all up in my interests. A lot of people are excited about records on vinyl now, but that’s just a fad for them. I’ve collected records all my life and will continue doing so long after all those guys are dead. I tried watching that HBO show and it was utter shit. It was like your dad trying to be cool or something.

Can you discuss the vintage synthesizer aspect of the record? It makes everything so much cooler. This really is a powerful and crazy trip.

B: Best leave that one to the phenomenon Marxo Solinas.

TPMS: I have a vintage keyboard collection in my studio, with mainly keyboards of the 60s and 70s. such as Hammond C3, Mellotron M400, Chamberlin M-1, Minimoog, model D, Optigan, harpsichord/spinet, various Arp synths, string synths, vocoders, Prophet-5, Rhodes, Clavinet as well as some old harps and stuff. Still I’ve tried to make it rather simple on this record, to make it more like our live-sound, so it’s not that layered and dense as the previous albums. Each instrument has more space around them I guess you could say. Also much of it was recorded live in the same room with the bass and drums, which was a bit of a challenge when it came to the mix, with the phase from the various microphones/sources which leaked quite a bit.

K: I in part play the synthesizers on “De reiser fra oss”. I play the Theremin with loads of echo and phasing effects, as well as the Stylophone routed through a Monotron using closing and shutting of the filter as an effect. It is my ambition to make cheap electronics sound expensive, through processing and stereo effects. So, for my part, its Theremin, Stylophone and Monotron through stomp boxes and tape echo. I used the Bass Murf from Moog a lot, it has great stereo possibilities. And of course the Roland SE-201 Space Echo, that is a huge element in the sound of all the synthesizers on the album. 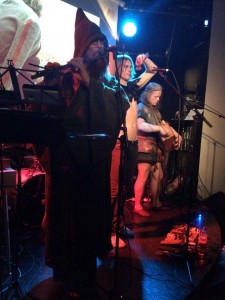 How does it feel to be working with Svart, one of the best record labels out there for hipper and aesthetically amazing releases, for this record?

B: It’s great, I felt really honoured when they contacted us. I love so many of the bands on their roster and I’m a great fan of a lot of the 70s Finnish prog and jazz records that they are reissuing.

April is your release month for multiple formats. How does it feel having the record reach people’s ears after all your hard work?

It’s a good feeling, man, I just wish we could have released it a lot sooner. We’re sort of backed up, now, with two more albums nearly finished and a children’s record well under way. But it’s all good, I guess, the feeling is like a short breather before getting back to it. Tusmørke is a very driven band, there is no rest for the wicked…thanks a lot! love it!