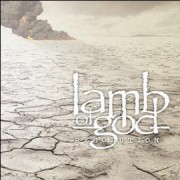 Silence, cretins. Only whispers and assumptions preluded this release. No “in the studio video #17.” No album teasers or mysterious live song surfacing. Just *bam, new album. Sans hype, Lamb of God quietly released Resolution. I can respect that. Nothing is worse than when a band gives too much away before the album drops. So with their latest release from Epic, they kept to themselves.

Read on to see if the silence succeeded.

Following 2009’s Grammy-nominated Wrath, Virginia’s Lamb of God toured a fuck ton extensively through 2010, finally bunkering down in February of last year to begin recording Resolution with Josh Wilbur at the production helm again. No surprise there, Wilbur has had his hands in God since Sacrament. Wait, was that just a sentence? Ay Kuroda! He’s like the fifth Beatle of metal.

Is it evident I’m stalling yet? No? Ok, if you listen to this on Spotify, there is a sick live version of Reclamation exclusive to them. Still nasty live I see. Not sure how I feel about Spotify yet.

So my first reaction was mum. More an imitative than actual silence, but one and the same. Let’s keep in mind this is still Lamb of God and not Spotify. By no means is this a bad album or one lacking overwhelming skill. I just don’t feel myself being drawn back to it like previous releases. Replay value is huge for me, as I can imagine anyone. Alas, nothing to the caliber of say, Walk With Me In Hell or Break You. Allegedly, this album was to return more to the early styles, rather than get lost in progressive backpedaling.

Resolution is not without its merits. King me/ is killing me is such a fantastic line from an equally as fantastic song. Within this uncharted song, so much ground lies that they have yet to break and really hope they take the heart of King Me and keep that around. Barbosa and Invictus make a nice pair, as well as Straight For The Sun and Desolation. To The End and Visitation really bring out some needed and heated solos, another thing I found lacking.

Overall, it’s a pretty straight forward Lamb of God album. Resolution clocks in at just under an hour, perfect for the train ride in. It doesn’t peak early and has some pretty bad ass songs on it, but this one just doesn’t turn me on like Wrath.

I’m going to go listen to Hit The Wall now.